What’s the difference between organic farming and conventional farming?
Unlike conventional farming, organic farming does not use crop protection products or GMOs (Genetically modified organisms) and thus has less impact on soils and biodiversity. However, natural products can be used. In the long run, this allows for healthier ecosystems and more resilient soils, whereas intensive farming would partly be responsible for the extinction of species of birds and insects. In 2021 in France, organic crops accounted for 10% of all agricultural land. That same year, organic food accounted for 6.6% of household food consumption. However, organic farming is not the only environmentally-friendly method: agroecology relies on the assets of each specific ecosystem. For instance, pollinators can be used to ensure plant reproduction. Soil characteristics can also be taken into account to know which seeds will easily grow there. Agroecology and some other methods are praised by authorities to ensure a real transition in our agricultural model.

How does the EU support the development of organic farming?
The funding of the farming industry represents one of the main expenses of the EU, and the New CAP (Common Agricultural Policy) for the programming period 2023-2027 supports organic agriculture. With the New CAP, 34 billion euros will be dedicated to stronger incentives for climate and environmentally-friendly farming practices and approaches. One of its main goals is to ensure soil conservation. Farmers participating in organic programs will thus receive higher financial support (for instance, through limiting their use of pesticides). With the New CAP, farmers are therefore encouraged to adopt agro-ecological practices. In France, the CAP accounts for 47% of the global public budget allocated to the farming sector. Through Europe, these new environmental goals are implemented through national level CAP strategic plans. As such, the new CAP guides national agricultural strategies. Thanks to the new eco-schemes, farmers who choose to go one step further in terms of environmental care and climate action will be rewarded. For instance, in France, farmers who work in farms that are 100% organic will receive €97 to €112 per hectare each year.

Why are organic practices being questioned?
What is at stake with organic farming is the development of a new solution to fight global warming. Indeed, according to the INSEE, in 2021 in France, the farming industry was responsible for the emission of about 81.2 millions tons of CO2 (out of a total of 418.2 tons, representing 19.41% of total emissions). This makes agriculture one of the most polluting industries. In order to tackle climate change, some experts believe that shifting to completely organic agriculture, more respectful of the environment, would be part of the solution. It is estimated that organic crops shelter biodiversity at a level 30% higher than in conventional farming. Nevertheless, some others argue that organic farming does not produce as many yields as conventional farming and would be less productive. Moreover, in 2022 the consumption of organic products has decreased in France, particularly because of inflation and consumers buying power. The problem of pricing thus remains to guarantee sales. Organic products are on average 40% to 50% more expensive than products from conventional farming. And last but not least, some farmers and environmental activists argue that the subsidies provided by the CAP for farmers to switch from conventional to organic farming are not sufficient to ensure a real transition.

Should we transition to 100% organic agriculture in Europe?

A transition to 100% organic agriculture in Europe is possible! This requires on the one hand considerable financial investments. And waste reduction, cutting out animal protein consumption and implementing local distribution channels on the other hand.

Organic farming has less impact on the environment, climate change and our health

In order to understand what is at stake, we need to have a systemic approach and to have a look at the impact of conventional farming on the environment, on climate change, on human health and on productivity. When comparing organic and conventional farming, we understand that even though organic farming is less productive, it also has far less impact on the environment, climate change and our health. We know that the economic cost of environmental degradation keeps getting higher and higher. This cost is also significant for human health and must be taken into account. Switching to organic agriculture could reduce these environmental costs and the impact on our health.

Today, 30% of our food is thrown away even before it reaches the consumer’s plate worldwide. Reducing food waste is possible if we manage to restrict competition between food produced for humans, and food produced for livestock. In other words, we have to reduce our animal protein consumption.

My only concern is that the current transition to organic farming is too slow, even though organic food is a realistic solution to the climate crisis we are going through. As such, in order to switch to organic agriculture, we need clear, compelling quantifiable objectives. However, when the new CAP has been voted on, some fell short of the necessary requirements. Regarding the goals of the European Green Deal, the CAP should bring a stronger support to organic farming. Only 1.8% of the CAP budget is allocated to organic agriculture, whereas organic cultivated land accounts for 8.5% of total agricultural area in the EU. The CAP subsidies should thus aim to help farmers transition toward organic farming much more than it does today.

The transition toward organic farming is a political choice

To succeed, three components must be developed: first, fight speculation and the excessive margins of food distributors in order to guarantee fair prices for all. Speculation causes a sharp rise in food prices and forces families to turn to food aid. Second, we need to provide organic food to school canteens and restaurants. Third, local distribution channels between producers and distributors must be developed. The French AMPAs (Association for the Maintenance of Peasant Agriculture) are a good example.

The transition toward organic farming is therefore a political choice. If we really want to achieve carbon neutrality in Europe, our agricultural policy must play an important role in the green transition. In that regard, organic agriculture is a solution.

Member of the French Academy of Agriculture and co-author of the book « Le tout bio est-il possible ? »

Advocating for 100% organic farming in Europe by 2050 would mean upgrading all agricultural productions. Is it possible, and is it something we should even wish for?

A transition of all European agricultural land to 100% organic farming would result in an important drop in agricultural production, regarding the inferior returns of organic lands in comparison to conventional farming. The difference is 25% on average, even up to 50% in the biggest field crops.

Can we consider, despite the production drop that would result from organic farming, that European agriculture would still be able to meet the needs of a population that will reach 530 million inhabitants by 2050? According to several studies (cf. the IDRI-TYPHA study), this would quantitatively be possible, but only if we were to reduce our meat consumption by 30% and reduce food waste by 50%. We are still very far from these recommendations.

The extension of organic farming, less productive than conventional farming whereas its labor costs are higher, would translate into higher cost prices of agricultural productions that would be passed on to consumers. What would their reaction be to this increase in the price of their groceries? Faced with a 100% organic European supply, what would the demand level for organic products on the European market be?

The vast majority of consumers would still choose food products from conventional farming, for they are much cheaper. These products would have come from other countries that would have kept developing productive agriculture, while this type of farming would have disappeared in the EU. As such, a 100% organic production supply would absolutely not imply a 100% increase in demand from consumers for organic products.

Let’s assume that organic farming in the EU represented 30% of total market share, a very high figure for high-end productions (the actual number is around 3 to 10% depending on the country), with 100% organic agriculture in Europe. The consequence would be that 70% of food production would find no outlet in the EU and would thus have to conquer other markets outside the EU to be sold.

With 100% organic agriculture, we would have to rely on imports

At the same time, to keep the biggest market segment satisfied, in other words the mass market, the EU would have to massively import non-organic agricultural products coming from countries that would have stuck to productive agriculture, and thus sold at a lower price.

Dedicating 100% of EU agricultural land to organic farming, while consumers, including middle classes, actually want to buy affordable products, would be a strategic mistake. It would sentence the EU, who would have left conventional farming, to rely on imports from powerful agricultural countries.

To conclude, food sovereignty of the EU producing 100% organically grown food would be severely undermined. A considerable amount of our food consumption would still be coming from conventional farming, but not from Europe.

Should we respect the CAP’s environmental requirements in the event of a food crisis? 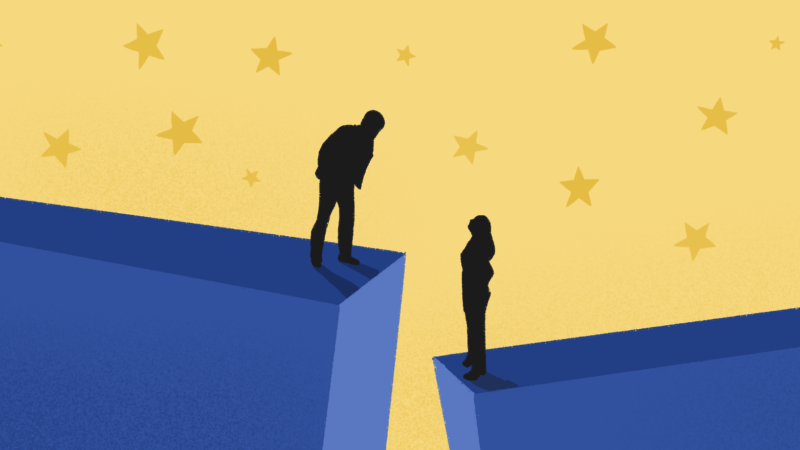 Is the European cohesion policy effective in tackling inequalities between young Europeans?