Should the EU intervene in the dispute on Catalonia? 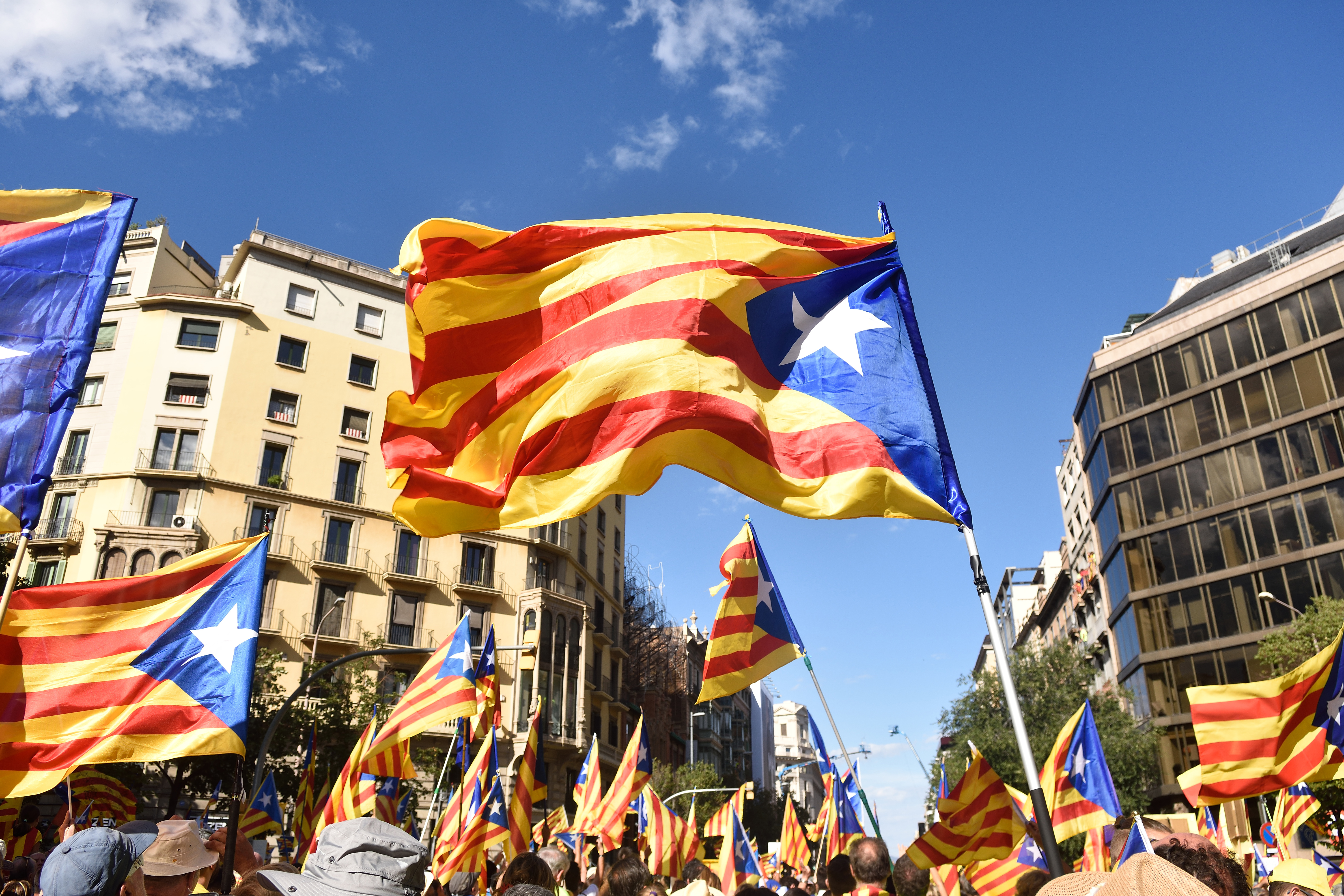 Why is there a separatist movement in Catalonia?

Catalan separatism takes roots deep back in the history. The region has conserved its autonomy for centuries in the Middle Age. First separatist mouvements emerged in the 17th century, when Catalonia revolted against Spain in 1640. These mouvements reemerged in the 19th century, when the region was strongly industrialised and the Catalan language was revived as a living language.

Nowadays, the independence mouvement grew strong in 2010, when the 2006 Statute of Autonomy of Catalonia was challenged before the Constitutional Court. The Court curtailed 27 and stuck down 14 articles of the Statute and declared the reference to ‘nation’ as having no legal effect, which caused immediate reactions in the region.
A nonbinding independence referendum was held in November 2015, which resulted in a suspension of the independence campaign by the Spanish president Mariano Rajoy.

When Carles Puigdemont took the office as the Catalan president in 2016, he promised to hold a binding referendum on independence of Catalonia, which was organized in October 2017. Tensions grew stronger and stronger between Catalonia and Spain, as the Spanish authorities tried to prevent the vote. The referendum resulted in a widespread violence, as the police tried to physically prevent people from voting.

Why the European Union?

Since late 1990s, the EU disposes of a protective mechanism for the respect of its fundamental values – the article 7. Divided into two parts, the article 7.1 enables the Council to give a formal warning to a Member State being accused of not respecting the EU values. The article 7.2 enables to suspend voting rights of a Member State and impose sanctions.

This article 7 was only discussed twice: against Hungary and Poland.

Why are we talking about it today?
On 14 October 2019, Spain’s Supreme Court sentenced 9 leaders of the separatist movement in Catalonia to between 9 and 13 years of prison, a news which has since been contested by the members of the independence movement as well as by a big part of the international community. Many criticized this decision and considered it as exaggerated and undemocratic.

This decision of the Spanish Supreme Court revived the separatist protests in Catalonia.

Urgent action by the EU required in Catalonia

Independent expert on the promotion of a democratic and equitable international order, Former Secretary of the UN Human Rights Committee


Spain’s violation of Article 1 of the UN Charter and Article 1 of the International Covenant on Civil and Political Rights (ICCPR) concerning the self-determination of peoples is aggravated by the arrest of political, social and cultural leaders, their physical abuse, persecution and prosecution by virtue of the criminalization of the exercise of freedom of expression,  assembly and association, as well as by the instrumentalization of the judicial apparatus for intimidation and repression, the denial the democratic right to participate in the conduct of public affairs, the right to vote in a referendum, and the right to be elected and represent constituents in the European Parliament (articles 7, 9, 10, 14, 19, 21, 22 , 25, 26 and 27 ICCPR). Pursuant to articles 10(2) and 96 of the Spanish Constitution, these international human rights are part of the Spanish legal order.

The Council has invoked Article 7 with respect to Poland and Hungary, where the situation is less serious

This situation breaches Article 2 of the Treaty of Lisbon, which stipulates that “The Union is founded on the values of respect for human dignity, freedom, democracy, equality, the rule of law and respect for human rights, including the rights of persons belonging to minorities.”  Bearing in mind that Spain has ignored the reports of the Catalonian syndic (ombudsman), the UN Working Group on Arbitrary Detention, the UN Special Rapporteurs on Freedom of Expression, Assembly, Independence of Judges and Lawyers, the European Council must now, pursuant to Article 7 of the Treaty of Lisbon, determine not only that “there is a clear risk of a serious breach … of the values referred to in Article 2”, but that the breach has occurred. The Council has invoked Article 7 with respect to Poland and Hungary, where the situation is less serious.

In my report to the GA (A/69/272) and to the UN Human Rights Council (A/HRC/37/63) I formulate 23 Principles of International Order, including the right of self-determination and elucidate the criteria for its exercise.  Catalonians are a “people” and satisfy the criteria laid down in the reports. The argument by Spain that self-determination was achieved through decolonization is disproven by international practice, bearing in mind the progressive development of international law, including the 2010 Kosovo Advisory Opinion of the ICJ, which prioritizes the right of self-determination of peoples over the principle of territorial integrity of States.

Catalonians are European citizens and have a right to protection by the European Commission. The EU’s credibility is at stake.

Read the full version of the article here.

Catalan crisis is not about independence. It’s about democracy and human rights

Trial against the civil and political leaders of Catalonia over the referendum of 2017 was a politicized trial marked with irregularities. The inhumane and unjustified pre-trial detention of the nine political prisoners was denounced by Amnesty, the UN Working Group on Arbitrary Detention as well as other human rights organizations.

Objectively the Catalan leaders could have only been sentenced for the crime of disobedience like president Artur Mas was over the 2014 referendum. There was no rebellion nor sedition. International courts have also confirmed this in ruling over the extradition of president Carles Puigdemont and his ministers for example in Belgium and in Germany.

Behavior of the Spanish police back in 2017 and once again over the recent weeks has not been right. Police violence has been condemned also by the Commissioner for Human Rights of the Council of Europe.

The repeated refusal by the Spanish authorities to even sit down and talk about the political conflict in Catalonia over the years has been irresponsible. When over two million people want independence and up to 80 % of the Catalan people want a binding negotiated independence referendum, it is clear that this reality needs to be grasped through political negotiations in stead of repression.

Spain is the only country in the European Union with political prisoners. It’s treatment of Catalonia over the years is not right. Democracy and human rights have not been respected. It is time for the international community to react and force Spain into the negotiating table. Catalan government is already there willing to engage in dialogue.

A drastic measure but one which surely would have effect is to use the Article 7 of the Treaty on European Union and sanction Spain similarly what has debated over the situation in countries such as Poland and Hungary. This will not likely happen, but it is what is needed otherwise the situation on the ground in Catalonia is going to escalate and Spain – and Europe with it – will plummet deeper into a crisis.

The European Union intervention in the Catalonia conflict is a mistake


Politics without fair principles and moral values is a hard power struggle. But obviously, politics also involves interests. National self-determination is one of the most complex issues in international politics as it has no clear formulation of legal-political rules or principles.

Those who claim for the right of self-determination may either be given credit for their appeal or turned down in a similar situation. Not only that but a strong emotion eventually helps hinder the progress of any balanced discussion. The 2017 referendum in Catalonia, hold under police repression for breaching the Spanish law, clearly showed that.

This is an internal issue of the Spanish State, not a competence of the European Union

Next, the heavy judgments issued by Spain’s Supreme Court on more than a dozen pro-independence politicians have originated mass protests. In free, democratic societies, it should be clearly legitimate to question the court’s judgements, and the type of crimes established by Spanish law on which the conviction was based. However, despite understandable international sympathies, it should be noted that this is an internal issue of the Spanish State, not a competence of the European Union.

At the legal level, the Treaty on European Union, Article 4 (2), clearly states the Union “shall respect their essential State functions, including ensuring the territorial integrity of the State, maintaining law and order and safeguarding national security.” Therefore, any non-requested or consented intervention by the Union may be looked as an interference in internal affairs and a violation of the European Union law.

In addition to the legal problem — and despite any moral considerations —, it would also be a political mistake: it could cause deep divisions among Member-States, mainly those with potential independence claims. Worse still, it would set a precedent that could be used by many others, both within and outside the European Union.

As Catalonia is not a unique case – the Basque Country (also in Spain), Scotland (UK) and others have similar claims of self-determination –, the intervention of the European Union would open a kind of “Pandora’s Box”: it would spread the idea that the Union protects or supports separatist movements against Member-States. The risk is not theoretical.

Spanish nationalism, already visible in the Vox party, grows with Catalan nationalism, and gains momentum from the real or imagined threats to the unity of Spain. So, despite good intentions, it is up to the European Union to stop nationalisms, not to get involved in the Catalan conflicts or to push them even further.

Despite all our efforts, we did not find a second legitimate and competent person willing to defend this point of view.

But even Jon Snow think it’s wrong. If you want to contribute to this debate and defend this position, do not hesitate to contact us at hello@therift.eu!

9 thoughts on “Should the EU intervene in the dispute on Catalonia?”