For or against ‘protecting the European way of life’? 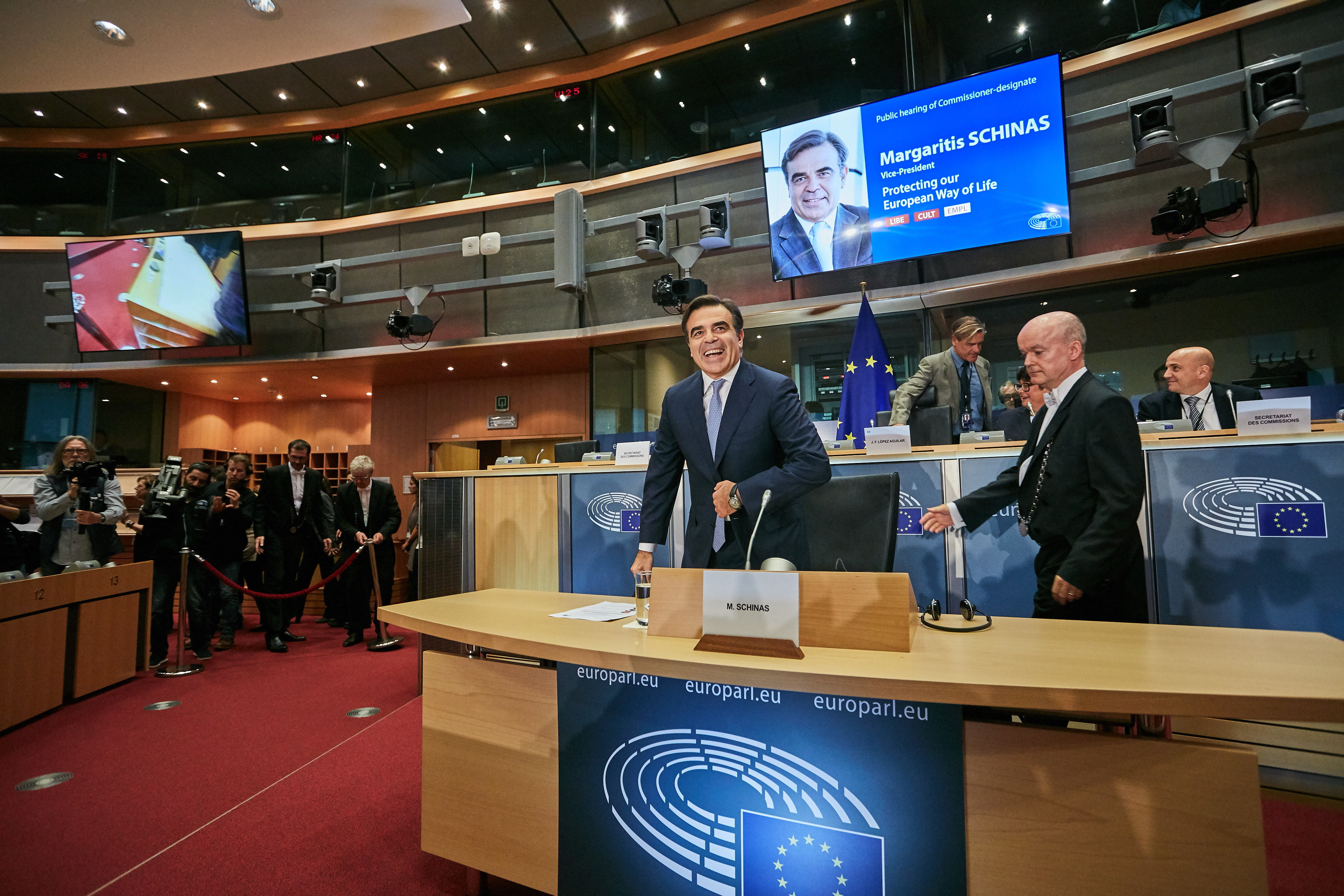 First, in the election of President of the European Commission, EU Member States propose candidates, and the European Council decide on a candidate to be proposed for this position. The candidate must then be accepted by an absolute majority vote of the European Parliament – which means, half of the representatives plus one person.

The nominee for this position is the Chief Spokesperson of the European Commission, Margaritis Schinas.

Moreover, the European Commission will not take office on November 1st, as initially planned. The start of work of the new EC was postponed for a month after 3 candidate-commissioners were rejected by the European Parliament after their hearings, and some MEPs are calling for a name change of the portfolio.

This debate does not focus on the candidate-commissioner, Margaritis Schinas. It focuses exclusively on the Commission’s portfolio.


This decision goes in a good direction. Because it testifies of a raised awareness. Too often the European Union did not know or did not want to assume that before being a construction, Europe is a civilisation. It is a civilisation naturally open to the world, but its laws, values and ways of life must be respected by those who desire to join. Starting with a separation of politics and religion, equality of men and women, individual freedom, and refusal of any kind of ideology which would be opposed to our rules of living, such as the islamist ideology. How can we deny the fact, that today, when we are facing communitarianism and jihadist attacks, that it is progressing in Europe?

Europe is a civilisation open to the world, but its laws, values and ways of life must be respected

One of the major challenges for Europe today is the one of integration in the migration context which, as we know, is particularly tense. Which Europe should we offer to the newcomers? An Europe of everyone, which in the end would be an Europe of noone? Or this “European Europe”, the one in favor of which General de Gaulle was advocating, and which is in reality the only durable Europe? It is indeed an odd conception of the European unity to deny what precisely unites the nations. This negation of who and what we are restrains the EU, because it leads the peoples astray, and serves its adversaries, as it ultimately reinforces “populists”.

The only outcome from an inconsistent Europe can be the one of an Europe without influence, dominated by foreign interests, surpassed by the ways of life which are not our ways of life

Let’s exit this paradoxe in which the EU has locked itself up for too long: on one side, Europe has the ambition to be what it will never be able to become – a nation, a unified society – and on the other side, Europe often refused to be what it has always been: a civilisation. Even the Euro holds the mark of this civilizational uncertainty: the images printed on our bills represent fictif buildings! Those who designed the single currency chose buildings that do not exist, with no doubt because they were afraid to put a nation before the others. As to say that the “Old Europe” does not exist anymore… Can we imagine a dollar bill without the figure of George Washington, or a fifty dollar bill without the Capitol Building? This refusal of being what we are weakens the Union. Because the only outcome from an inconsistent Europe can be the one of an Europe without influence, dominated by foreign interests, surpassed by the ways of life which are not our ways of life. Saying what Europe is today is a matter of urgency for the European Union.

Why the ‘European way of life’-talk is un-European


Consternation in Brussels over the Summer, after president-elect of the European Commission Ursula von der Leyen presented the plans for her future team. One of her Commissioners would be in charge of ‘protecting the European way of life’. Within his remit would be aspects of inclusive employment, education and security, but more importantly: asylum and migration. Worse than a misnomer, this is a worrying error of judgement which says all about how centrist forces are pandering to populists. Linking migration to a supposed threat to our way of live is not just incorrect. For someone in her position, it is simply un-European.

To understand why, you need to grasp the role of the institution she will be leading. If there were a logo on the European flag, it would be the Greek mythical hero Ulysses, who demanded his crew tie him to the mast for fear of succumbing to the Sirens’ song. Europe’s history has taught us not to give in to political temptation. We tied our governments to the mast of a rules-based, liberal democratic order, to better protect our citizens’ rights and liberties. These were enshrined in the EU treaties, to which all countries freely and democratically subscribed when they entered the European Union. The institution commissioned with the task of applying those rules and breathing life into those rights and liberties is, you guessed it, the European Commission. It is, in Eurospeak, the Guardian of the Treaties. Properly understood, the Commission is the very last place where populist temptation to do away with those rights and values should take hold.

For sure, the pressure is on. The Sirens of authoritarianism, division and ethnic hatred have been making themselves heard for years now, and some national governments are wilting. The rule of law is under threat in several EU-countries. Freedom of speech is less self-evident than it has been for decades. Academic freedom is being undermined, media are pressured, and judges are deemed suspect, women and minorities are at the receiving end of white male resentment.

And the radical right’s alibi is always and everywhere the same: we are under threat from a wave of immigration, we need to protect our old way of life, hence all luxury rights and liberties are suspended. The foundation of the whole narrrative is the same imagined link between migration and our way of life which Ursula von der Leyen signed up to.

As an argument, that is plainly wrong: last year saw 580.000 asylum claims, or 0,1 percent of the European population – most of which are immediately refused because groundless – and there is no evidence whatsoever that this would undermine our ‘way of life’, no matter how you choose to define that.

As an excuse, it is blatantly self-serving: in or out of office, East, West and South, Europe’s populists are never far away from scandal, their corruption and abuse of power and position amply demonstrated, and what better that to point the finger at someone else – ‘the Others are coming!’ – to win popular support in spite of some of the poorest governing their citizens have ever been submitted to?

As a strategy, it is quite simply dumb. Worse than the radical right trying to may hay out of racism, is some of the centre parties’ continuing indulgence of that effort. Precisely at a time when the populist wave has started to retreat in many, if not all European countries, there are still plenty of weak-kneed centrists who believe they had better try to surf it than stop it. And precisely now, for the first time, one of them has landed the most coveted post in EU politics.

The Sirens of authoritarianism, division and ethnic hatred have been making themselves heard for years now

The European Parliament is having none of it. At his parliamentary hearing earlier this month, the Commissioner in charge was lambasted for the title foisted upon him, and a majority of parliamentarians agreed not let him pass unless it is withdrawn.

The implication that immigration is a threat – the threat – to Europeans living their lives in safety, solidarity and freedom is an erroneous, dangerous dog whistle. Let others attempt to use it against the EU and all that it stands for. Let’s not give in to the temptation to do the same.